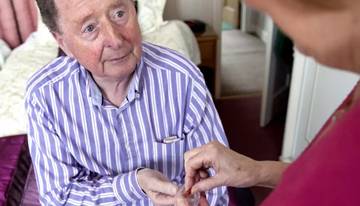 A treatment that could reverse some of the main symptoms of Parkinson’s disease – potentially enabling patients to recover enough control of their movements to play tennis – is set to be trialled in humans for the first time.

In what was described as a “major leap forward”, scientists in Japan managed to significantly improve the condition of monkeys given an artificially induced version of the disease.

They did this by taking tissue from adult humans and turning it into stem cells, which are capable of becoming any kind of cell. These were then used to create new brain cells in the monkeys, with dramatic results.

Parkinson’s involves a progressive loss of brain cells that release a chemical called dopamine, causing the trademark uncontrollable shaking and loss of balance.

The success of the experiment raises hopes of reproducing astonishing results achieved by transplanting brain tissue from foetuses into Parkinson’s patients in the 1990s. This appeared to be hugely successful, until major side effects were discovered and the trials had to be stopped.

The scientists in Japan monitored the monkeys for signs of cancer and other feared side effects, but have concluded it was now safe to proceed to clinical trials in people.